I believe that the day will come when survival will be real. What was a fantasy when, in 2005, I started giving workshops focusing on the attacks and Amoks, today is a reality. The odds of survival in the jungle are very small. Therefore, the NETASA project works on the four most important points in terms of survival.

What are natural disasters?

A natural catastrophe is a phenomenon of nature that often causes great material destruction, loss of life and changes in the earth’s surface.

Most natural disasters are associated with specific atmospheric conditions. However, the internal dynamics of the Earth also have great influence.

Natural disasters have been plaguing our planet in recent years: hurricanes, tornadoes, earthquakes, floods, droughts, volcanic eruptions, tsunamis, among others.

The consequences of a natural disaster range from material damage to the death of people and other beings.

Our goal is to be able to survive the 12 days following a catastrophe (the average time to get help) and also help others to survive. 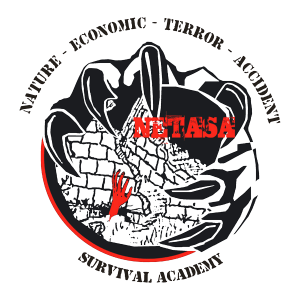 Economic collapse: What is it? Is it possible to be prepared?

Unless the world is destroyed in the blink of an eye, every individual, as well as the communities as a whole, will still have all that money has already made it possible (and that would include paying for the services of others).

During a collapse, even if you have money or gold accumulated, the most likely is there is no way and where to spend it. Grocery stores, gas stations, supermarkets and other stores will be closed.

Unemployment will increase, which will lead to a rise in crime, since there will be those who try to take advantage of the situation. The supply of food will decrease, so your larder will have to be replenished by your own means, through the planting of food and livestock. In these scenarios, you need to have enough water and food supplies at home for at least 90 days.

Our goal is to prepare, but also to teach not to panic.

“Criminals (amok) expand their narcissistic self-image and devalue their fellows”

An attack is an act of violence aimed at causing some harm or even destroying something or someone. It may or may not have an ideological motivation (be it religious, political, moral, etc …).

It can happen anytime and anywhere: jungle, tunnel, mountain, river, sea and in any mode of transport: airplane, car, on foot. Or just lose ourselves on a mountain, in the desert, in the forest.
The aim of training is to teach how to survive in these different places and situations through techniques that teach you how to look for food and drink, to make fire, to orient yourself without the help of compasses, through the location of the stars, sun, among others.

Get in touch with me, visit our Training Center or our Survival Academy.